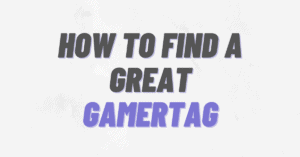 How to Find a Great Gamertag

Needless to say, it’s easy to find any old gamertag, but it’s not easy to find a great one. In this guide, we’ll talk about why finding a great gamertag even matters, as well as how to go about doing that when so many have already been taken.

What is a Great Gamertag, and Why Bother?

Having a great gamertag may not seem all that important, but don’t forget, that gamertag is your online identity. Just like a normal name, it makes a first impression on other players, giving them a rough idea of what kind of person you are.

A gamertag has even more importance if you plan on using gaming as a platform for something like streaming, in which it becomes not only your identity, but possibly even a brand. In such cases, your gamertag needs to be something catchy yet appropriate, something that people actually want to say.

A great gamertag earns a smile or a chuckle out of other players, or at least gets them to acknolwedge that it’s clever. How do you actually go about doing that? Well, there are many things to consider.

Most platforms have rules that dictate what your gamertag can be, or at least certain aspects of it. Before you can even think of a great gamertag, you should probably learn what these rules are so you don’t waste your time. It would be a shame to think of a great name, only to find that it isn’t viable!

Common rules or restrictions on gamertags include but are not limited to:

Keep all of these things in mind, as well as any other special rules or restrictions that a platform will enforce, so you can make a great gamertag the first time.

Finding Inspiration for a Name

Inspiration doesn’t always come easy. Sometimes, it’s difficult to think of an identity that means anything to you or defines you in some way. There are many ways to make this an easier process. The simplest thing to do is to lay out words that mean something to you.

What we mean by this is simple: just make a list of things you like. Favorite animals or colors, your initials, hobbies you partake in, personal traits you are proud of, and similar things can all serve as an easy way to create a gamertag that reflects on you to some degree.

Maybe you like dragons and the color black. Maybe you’re proud of your football achievements, or 48 is your favorite number. It may sound simple enough, but a good gamertag can easily be comprised of things you like or interest you.

If you want to get really unique, you could even consider going through a dictionary or a thesaurus. There’s a lot of interesting words out there: if you want to make your gamertag special, finding some of those unique words few people know about can go a long way.

Other options include interesting tools like alliteration, or perhaps using foreign words from a language that you like or are fluent in. When it comes to making a gamertag, it’s really just about making up something cool, and any of the above options will help you do that.

Of course, if you just really can’t think of anything on your own, or you simply don’t want to go through the process of coming up with a unique and interesting gamertag, there are other options as well.

Thanks to the internet, there are tools for generating all sorts of words, including gamertags, online. Of course, you don’t have to commit to any randomly generated name, but you never know: one of those randomized names could inspire you, or require just a little bit of editing to become something that you like.

In fact, you don’t even have to use a specific gamertag generator. You could use a fantasy name generator, a superhero name generator, pretty much any type of random name generator that fits the bill for the type of name you are looking for.

Consider Future Uses For Your Name

Your may want to make an identity for a different platform like PlayStation or Switch, or you may want to start a YouTube channel using your Xbox username, or start streaming on Twitch.

Point being, just because your username is valid on Xbox doesn’t mean it will be available on every other platform you might want to use one day. Of course, we’re not saying that you should check the validity of your username on every conceivable platform on the off chance you’ll use it one day. However, you actually can do that if you want.

Namechk is a simple and free online tool that gives you the ability to check the availability of a potential username across dozens of platforms and sites. If you want to know whether or not your username is truly unique enough to stand out across multiple platforms, this tool will help on that front.

Branching out from the above business of using a consistent username across all platforms, it really depends on how much you care about your online identity. If you’re just a casual player who doesn’t care much about a name, then chances are you wouldn’t be stuck over coming up with a gamertag in the first place.

Of course, your preferred username may not be available across all platforms or games you engage with. When that happens, it’s not a bad idea to consider special characters, if they are allowed. The addition of a special character into your usual name can ensure it is still recognizable enough to others, and maintains most of its integrity.

This is also a potential solution if you are deadset on using a name that is already taken by someone else. If ‘SpartanNinja’ is already taken, maybe ‘Sp@rtanNinja’ won’t be, and it’s close enough to still be seen as the same name when people look at it.

Don’t Sweat it Too Much

When we have the chance to go by an alias, we all want that alias to be cool or interesting, or memorable in some way. Just noticeable, really. But at the end of the day, don’t let the creation of a gamertag prevent you from actually getting into the game and having fun.

After all, while a cool gamertag may earn you a curious glance or question from other gamers, it’s how you game that will define what your name really becomes in the future. Even relatively ordinary gamertags become iconic or recognizable based on the person who holds that gamertag, not the name itself.

So while having a cool name does go a long way, don’t go thinking it’s the defining aspect of your online identity. Come up with a name that you like, and don’t worry too much about whether or not other people will think it’s cool or iconic.