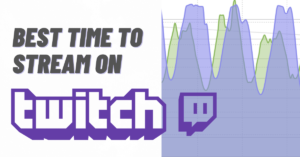 Best time to stream on Twitch for 2x viewers.

With over 100,000 live channels on Twitch every day, competition for viewers has never been so extreme. Getting new viewers and growing your channel organically without a good strategy is near impossible.

One of the most important factors to consider is what is the best time to stream on Twitch to maximize viewers and minimize competition from other channels. This is especially crucial for newer streamers as every little advantage helps.

When is the best time to Stream on Twitch

There are two main things to consider when deciding what time to stream on Twitch;

The best time to stream on Twitch depends on the needs of the individual channel;

New channels with a small number of followers and very few regular viewers should focus on streaming during times when there is less competition.

Established channels with a good number of followers and regular viewers should focus on streaming during times when people viewers would be online.

Best time to stream on Twitch for new channels

The best time to stream on Twitch for new streamers is between 10 AM and 4 PM U.T.C

Best time to stream on Twitch for established channels

The best time to stream on Twitch for established channels is between 5 PM and 12 AM U.T.C

Twitch is most active during these hours, therefore, there is a greater opportunity for attracting more viewers to your channel.

The peak for daily viewers on Twitch is 8 PM.

Best day to stream on Twitch

We have looked through the data and found there is no pattern to suggest that there is any advantage or disadvantage to streaming on any specific days of the week.

All days of the week, including the weekends, generally have the same number of viewers during the 8 PM peak.

The graph below shows every day in the month of January 2022. Each spike is the 8 PM peak for that day.

What if you can’t stream during these hours?

The hours which we have outlined in this article should be thought of as a guide and not a rule, if you can stream during these hours then you do give yourself an advantage, however, there are successful streamers who go live at all times of the day and night.

Don’t get too hung up on the time that your stream, and instead worry about the quality of the content which is being broadcast.

How many hours should you stream?

The number of hours a stream should be live usually depends on the streamer and their audience. Some streamers are known for longer streams of 24+ hours, while other streamers may only be live for a couple of hours.

As a general rule, You should aim for each stream to be live for at least 3 hours as this would give enough people the chance to find your stream.

However, Streams that are live for at least 8 hours are statistically more likely to generate more viewers, followers, and subscribers per hour.

how often should you stream on twitch

How often should you stream on Twitch? The answer depends on your other responsibilities in life and your streaming goals. You should stream at least twice a week and no more than 6 days in a row if you’re looking to grow your stream.